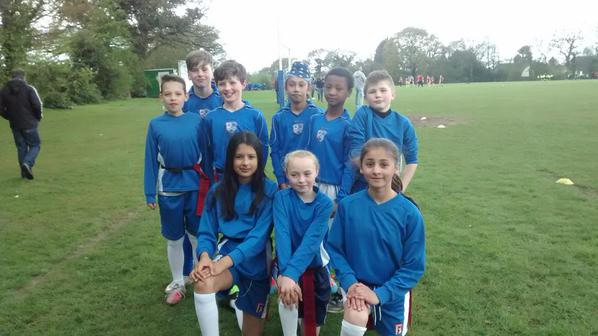 It was a great day of rugby at Preston Grass Hoppers RUFC on Thursday as over 20 schools took part in the 2015 TAG Rugby Tournament. Kennington's team played 3 games in their league. They lost two and won one. Ther was some great running, tagging and passing from all the children. Idriss should great defence with his superb diving tags, Mia was fearless in her running and Ameraj scored some fantastic tries. The team got through to the quater final of the plate competition and came close to progressing to the next round but Cottam Primary School were a bit too strong and they were beaten 5-4. Hena and Arwah showed great determination and Ben did some of his trade mark barn storming bursts. Frankie, Harley and Hayden all put in a good effort but it wasn't quite enough to see them through. It was a great afternoon though and all the players from all the schools really enjoyed themselves. Well done everyone. Thanks to all the parents who gave lifts and their support as well.